PayString was previously known as PayID.

RippleX runs a metrics collection server for general use by anyone running a PayString server. Sharing your metrics with RippleX allows the PayString community to aggregate and monitor PayString adoption and growth metrics in one place.

Metrics are reported to RippleX by default but you can push metrics to your own Prometheus pushgateway. Here's how to configure your PayString server to do that:

To opt out of pushing metrics entirely, set the following environment variable on your server:

You can use this data to generate real-time charts. For example, this chart shows how many PayString address mappings exist in the system over time:

This chart shows the rate per minute of PayString lookup requests:

Import metrics from the PayString server to Prometheus#

You can use a push or pull method to obtain metrics from Prometheus.

How to pull metrics to Prometheus#

Here is a sample prometheus.yml configuration file set up to pull metrics from a PayString server running locally.

# my global config
global:
scrape_interval: 15s # Set the scrape interval to every 15 seconds. Default is every 1 minute.
evaluation_interval: 15s # Evaluate rules every 15 seconds. The default is every 1 minute.
# scrape_timeout is set to the global default (10s).
# A scrape configuration containing exactly one endpoint to scrape:
# Here it's Prometheus itself.
scrape_configs:
# The job name is added as a label `job=<job_name>` to any timeseries scraped from this config.
- job_name: 'prometheus'
honor_labels: true
# metrics_path defaults to '/metrics'
# scheme defaults to 'http'.
static_configs:
- targets: ['localhost:8081']

How to push metrics from the PayString server to Prometheus#

By default, the reference PayString server pushes metrics to the RippleX pushgateway. To push metrics to your own pushgateway, follow these steps:

By default, a PayString server will push metrics every 15 seconds to the configured pushgateway. To change this frequency, set the PUSH_METRICS_INTERVAL value. For example, to push every 5 minutes (300 seconds), set PUSH_METRICS_INTERVAL=300. This value must be a positive number.

As mentioned above, you can also explicitly set PUSH_GATEWAY_URL=https://push00.mon.payid.tech to push the metrics from your PayString server to RippleX.

Visualize metrics with Prometheus and Grafana#

Prometheus has an admin web console with limited visualization capabilities on port 9090 (default), as shown in this example. 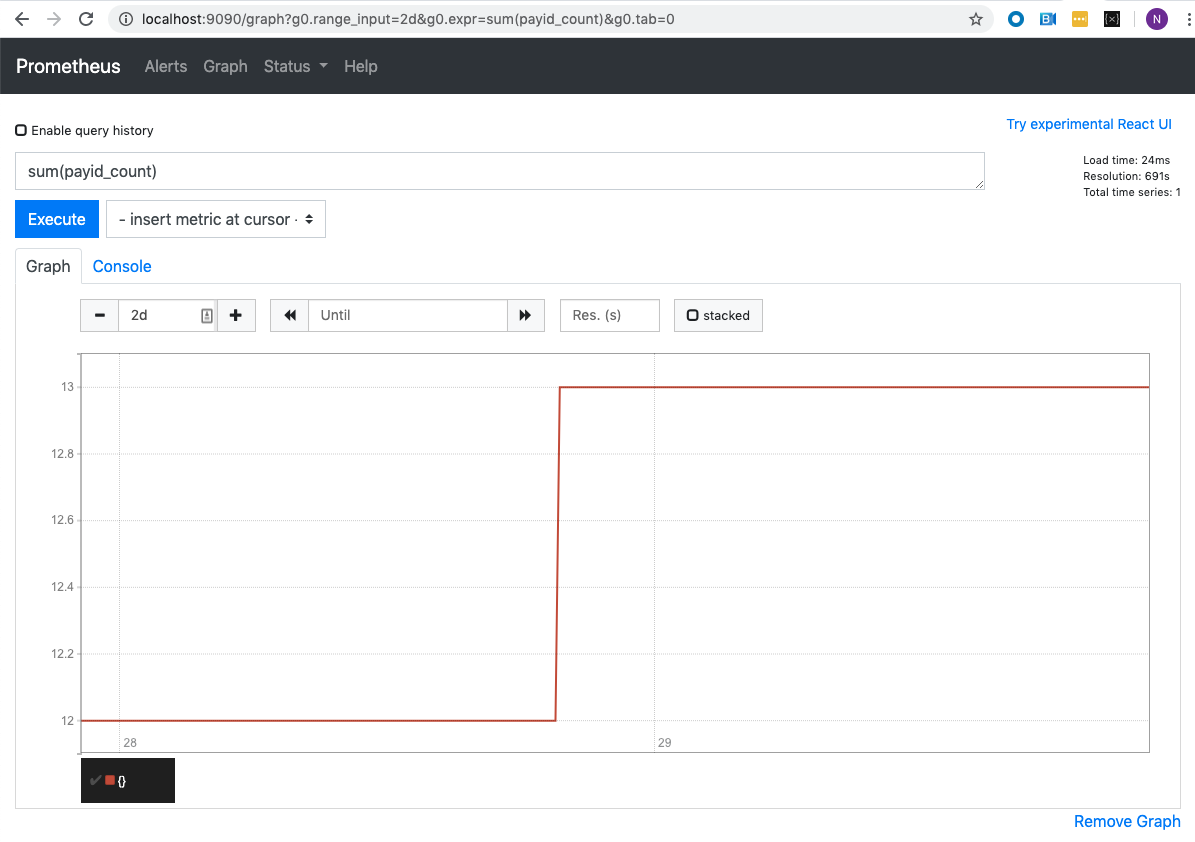 To build dashboards with multiple charts, you can use Grafana and configure Prometheus as a datasource.

Deploy a PayString server with Docker, and pull PayString metrics into Prometheus#

Install the following software on your machine, if not already present.

Build a Docker container for setting up a PayString server#

Run these commands to build a Docker container for a PayString server.

You will run several containers in Docker that must talk to each other. To set up these containers, create a docker network called paystring-network.

To have a PayString server, you require a Postgres database to store PayString accounts and address mappings. To do this, run the postgres database in docker with a default password of password, and tell the database to use the paystring-network that you previously created. Name this docker container paystring-postgres, so that you can reference the container by name when you connect your PayString server. Note that both the default database and the user are named postgres, as described at Postgres Docker Official Images.

Start and test the PayString server#

Test whether the PayString server is running by creating a PayString with this cURL command.

You should get a Created response.

Query the PayString server to make sure it resolves, using this cURL command.

In this step, you will run prometheus in docker and configure it to scrape the PayString server’s metrics. To do this, you need to create a prometheus.yml file on the host machine and mount it in the docker container.

Create a file named prometheus.yml with these contents.

You can verify Prometheus is running by opening http://localhost:9090/graph in a browser.

You can verify metrics collection metrics are being collected by entering the following expression into the form:

Click the Graph tab to display the results in graph format.

Here are some other example expressions: